Saturday saw the birthday party of a little girl I know. It was brilliant. My birthday present to her was to help with decorations. And so I did. I went a bit crazy, and together, with her mum, we covered the house in pom poms, streamers and fairy magic. 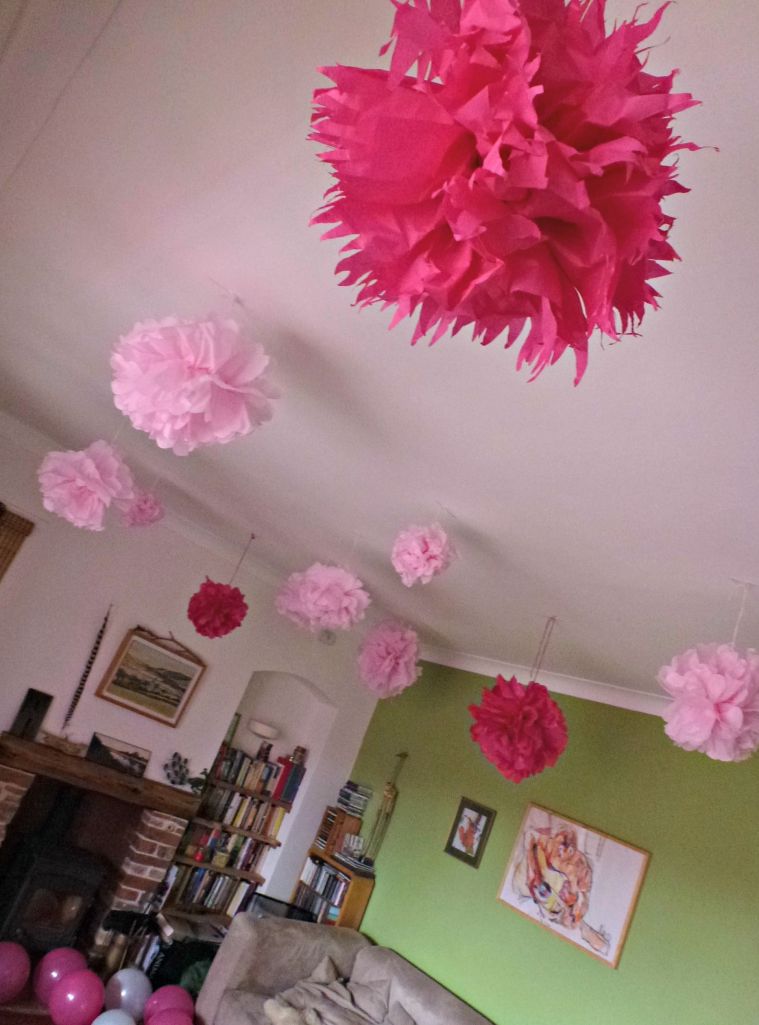 Unfortunately my photography skills haven’t improved much over the last few months so my interior shots are dull and fuzzy. I’ll post the pctures anyway because they show what we got up to.  I just hope the host doesn’t mind me showing pictures of her lovely house!

Half a tonne of tissue paper pompoms were made in all different sizes. We stuck to green and pink colours, which worked well together. The small pompoms got threaded together to make garlands.

The decorations came from everywhere. It was a big and happy collaboration with lots of friends lending little things, big things, colourful things, all of which came together to create a delightful fairyland. 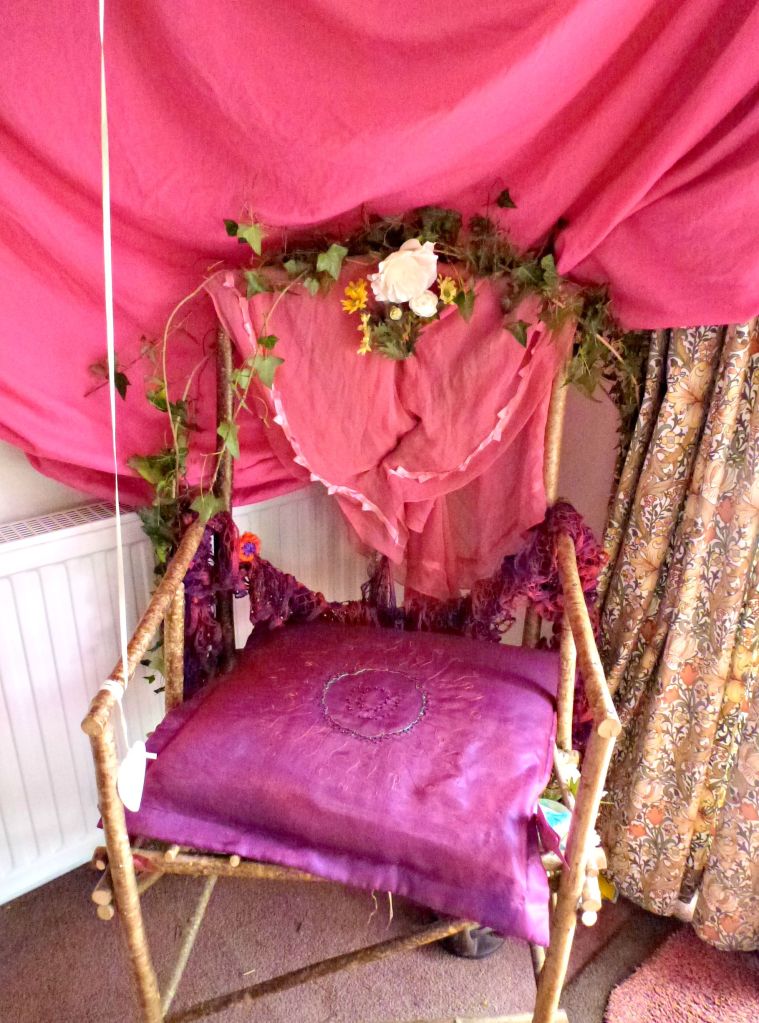 A handmade fairy throne of hazel. It’s amazing (even if it does have woodworm)!

All of these potion vessels were gathered from the local junk yard for pretty much nothing. 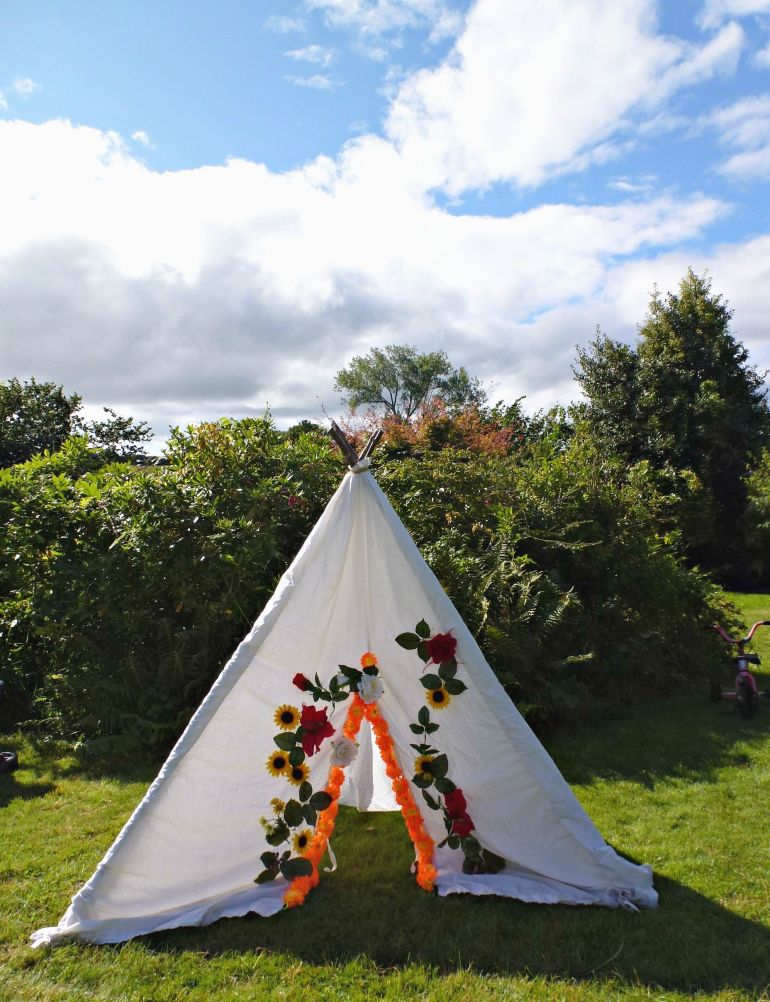 Sadly I didn’t see any fairies flit past this dodgy handmade teepee (old duvet cover). The flowers were pinned on and sticks cut from nearby.

I think a lot of the cushions and rugs were found in charity shops but I did do that so I’m not sure.

It rained in the morning but ten minutes before kids arrived, the sun came out and we rushed outside to put up all the tricks.

I love this secret fairy garden. It has reminded me that, I was told an actual fairy had moved into the garden. I heard that a little tiny door had appeared at the foot of one of the trees. I completely forgot to go and find it. It’s better not to disturb them I suppose.

I think this was definitely the most popular game. A magic potion table.

It was mostly vinegar, bicarbonate of soda and food colouring. There was also soap and shaving foam, stuff like that. It was loads of gloopy, stinky fun. There was also a wand making table, which I didn’t have a go at. I was too busy floating around being a fairy.

Everyone’s favourite was the food table. My paper mache toadstools popped up amongst the leaves and cakes. There was more food than this it just hadn’t been put out yet!

Nothing was expensive, a bit of imagination was all that was needed.

It all looked beautiful. The evening before, the birthday girl and her brother helped their mum to make the fairy cakes. I’m told they enjoyed making little fondant roses to go on top of the icing. Loads of fresh fruit  and leaves were used to decorate the table: blackberries, hazelnuts and ferns from their garden and figs with their leaves from mine.

The vintage cake stands worked really well with all the foliage. I’ve seen loads of them in charity shops recently. The back drop of netting is an old net curtain from my living room (we got a kitten last week and using her sharp claws, she tore a giant hole in it). It was recycled into a gauzy backdrop for the butterflies to settle upon.

The location was perfect too. It was just so much fun.  I don’t really know what else to say about it. Well, I could reveal my costume I suppose…

My fairy shoes. Lots of felt cut with pinking shears stuck on to old shoes using my trusty glue gun. To add a bit of detail I stitched in some leafy veins. I also wore some green fairy wings and a garland of leaves in my hair. I smudged eyes, cheeks and brows in bright green eye shadow too. There are a couple of photgraphs of me but I look yuck so I’m not putting them up 😛 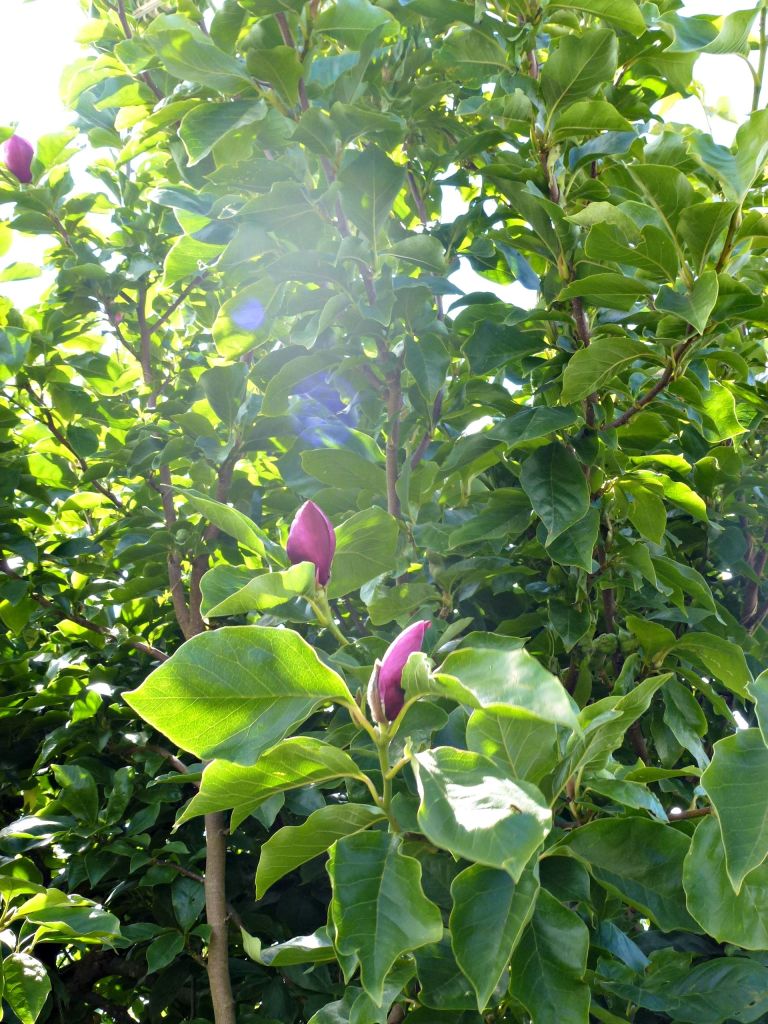 7 thoughts on “Fairy helper for a day: A birthday party.”