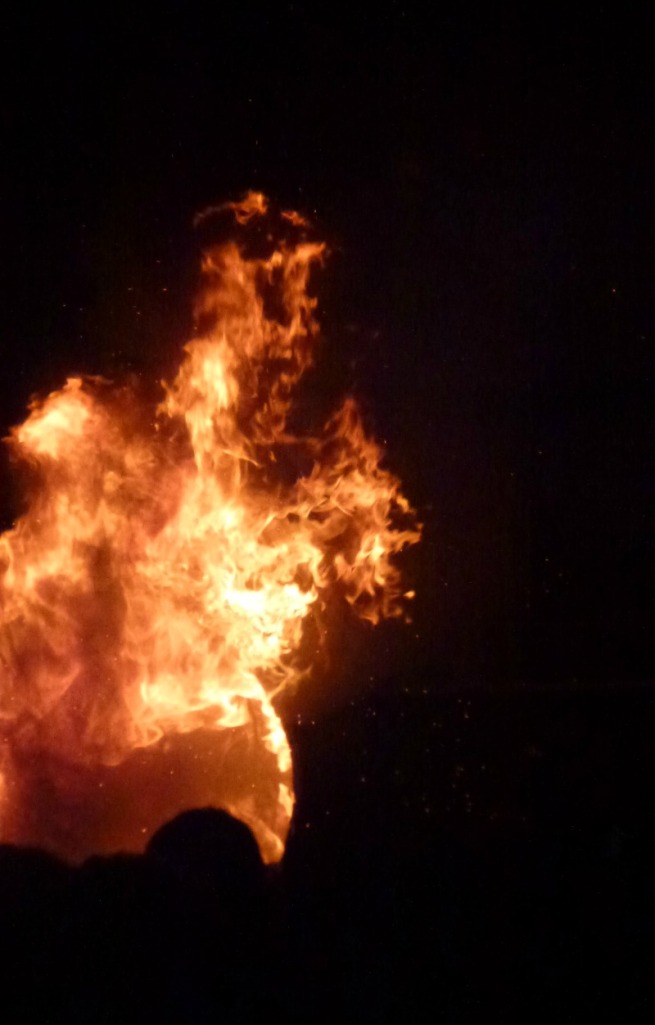 It’s November and I live in Devon, that means one thing to me: Tar Barrels!!

I am alive and well after spending an evening being squeezed and squashed in amongst thousands of people. Saturday night was absolutely mental! It’s been a few years since the Tar Barrels was held on a Saturday night and the difference in crowd numbers is huge. If the 5th of November landed on a Tuesday, for example, it’d be comparatively sedate (I’m lying, it’d still be nuts). 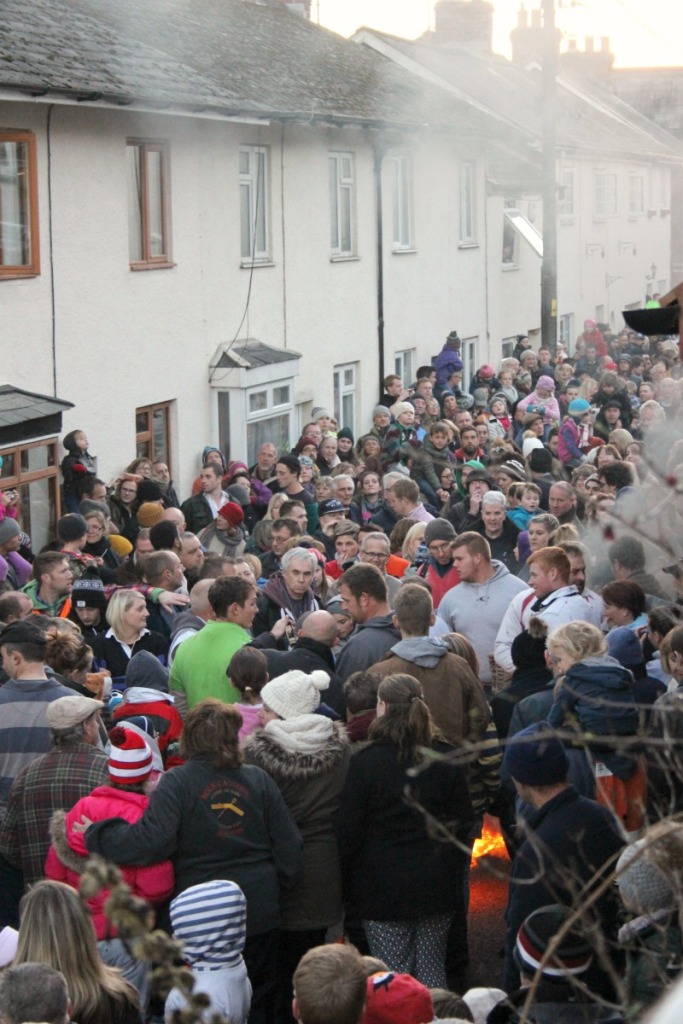 Ottery St Mary is a town in East Devon and it’s been my home for seven years. It’s my favourite place too and there are many reasons why. Pop over to The Guardian’s latest Let’s Move To… for a bit more of an insight as to why I think it’s so special. (I wonder if you’ll spot anything interesting in that article… Let me know if you do! heehe). I can’t believe the article didn’t mention the beavers that live on the river: the only wild ones in England! Ottery obviously has so many good things, they can’t all fit into one article.

I wrote about the Tar Barrels last year but didn’t get many pictures (didn’t get much of an experience at all but that’s last year’s story). This year, I really wanted to get some decent photographs. Since I got my nice camera, I’ve spent the last eleven months practising taking pictures of crochet. I never thought to learn about taking pictures of moving flames, whilst trying not to get trampled in the dark. Silly me. The pictures I got on Saturday are not as good as I’d hoped for. There are people that have taken better on their Iphones. Meh. 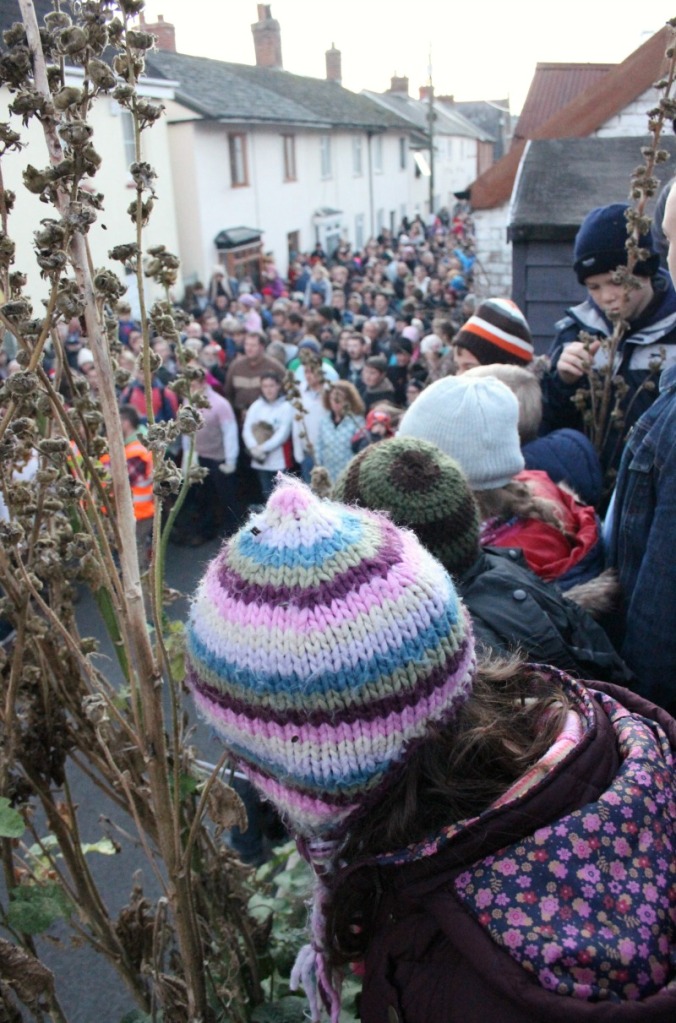 The family set out just after four o’clock and made our way to one of the kid’s barrels. Luckily for us, one of our friends has a garden with the perfect vantage point for observing one of the barrel runs. It’s good for kids watching as they don’t always like being in the crowds and this event isn’t really recommended for children. We only take the kids out for the early barrels and the bonfire. After that, they have to go home! 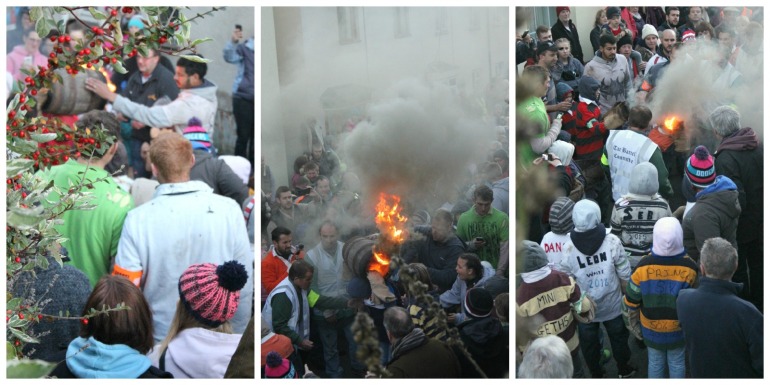 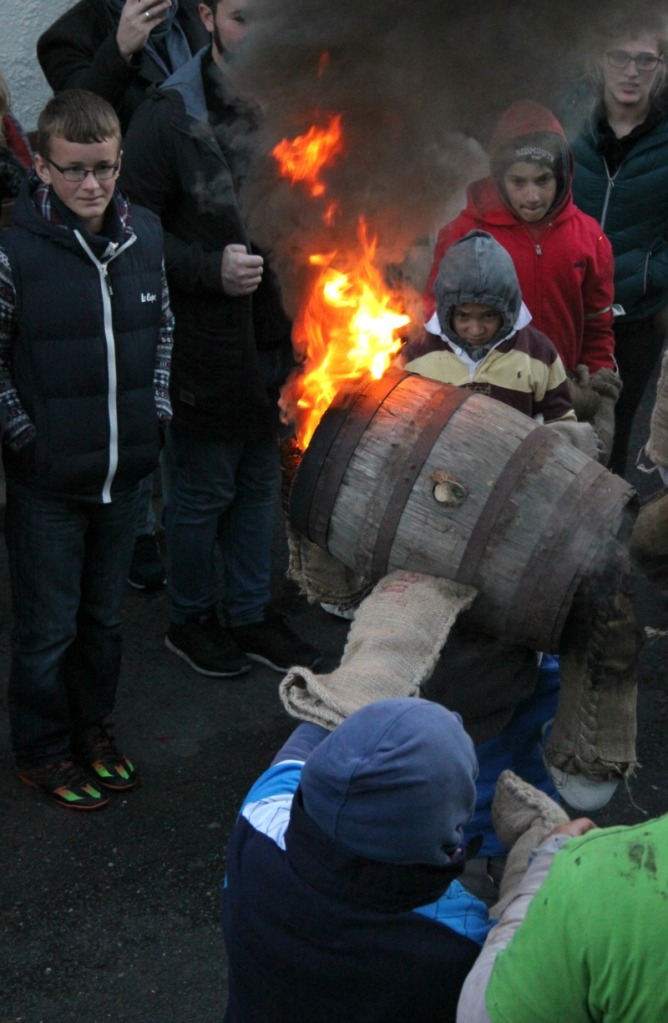 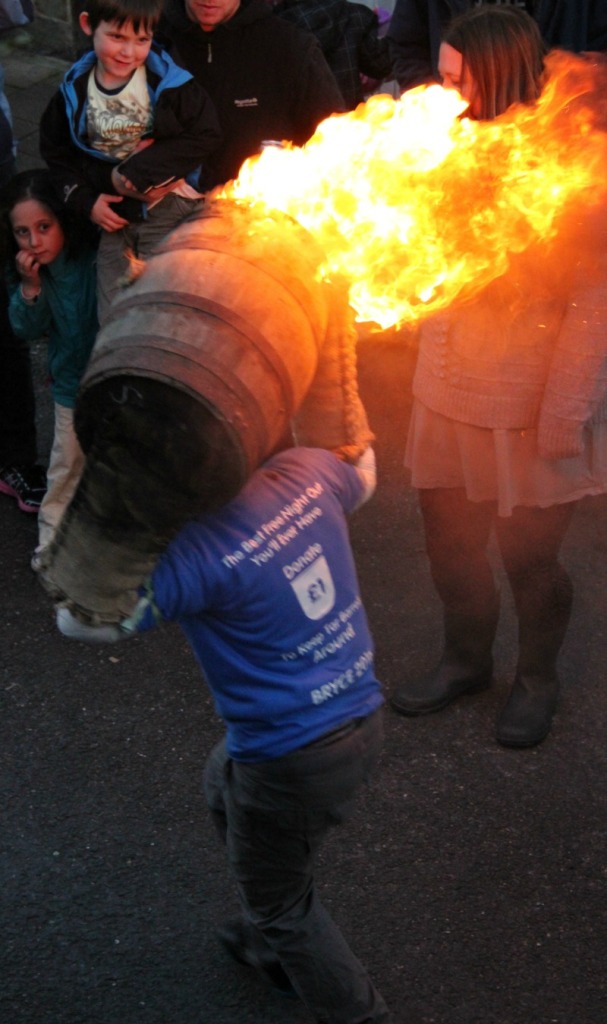 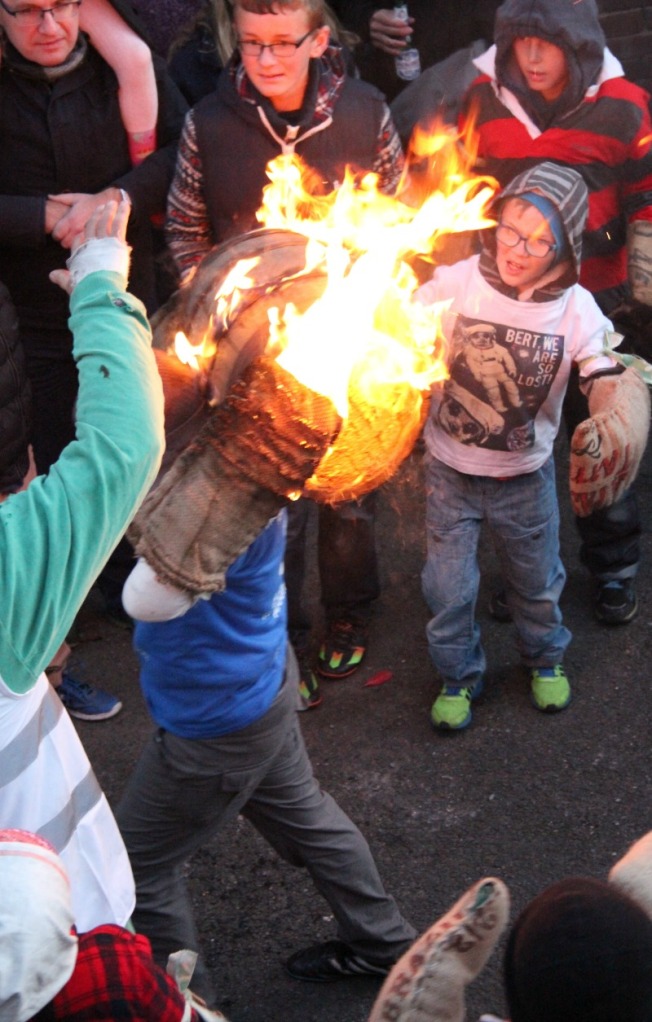 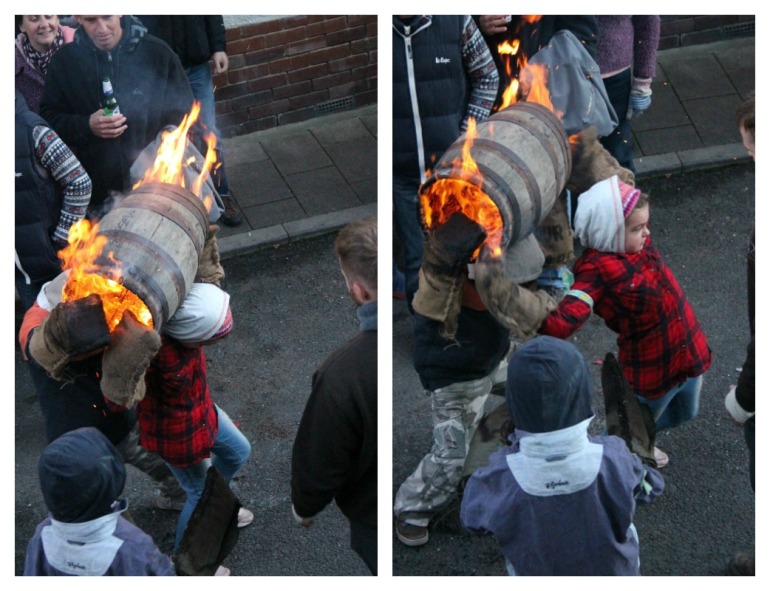 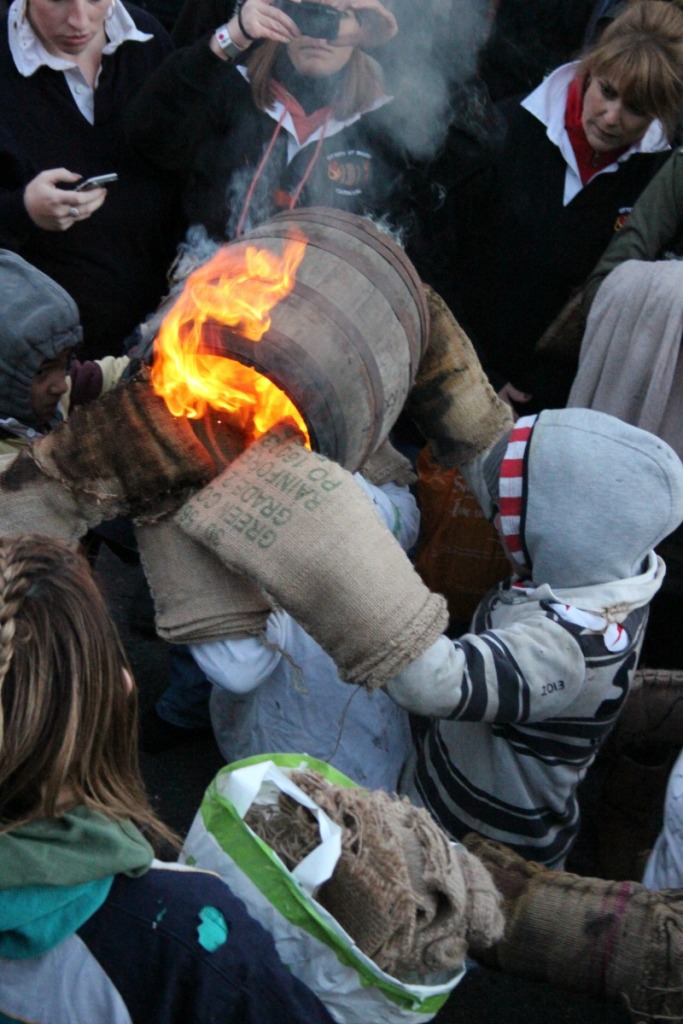 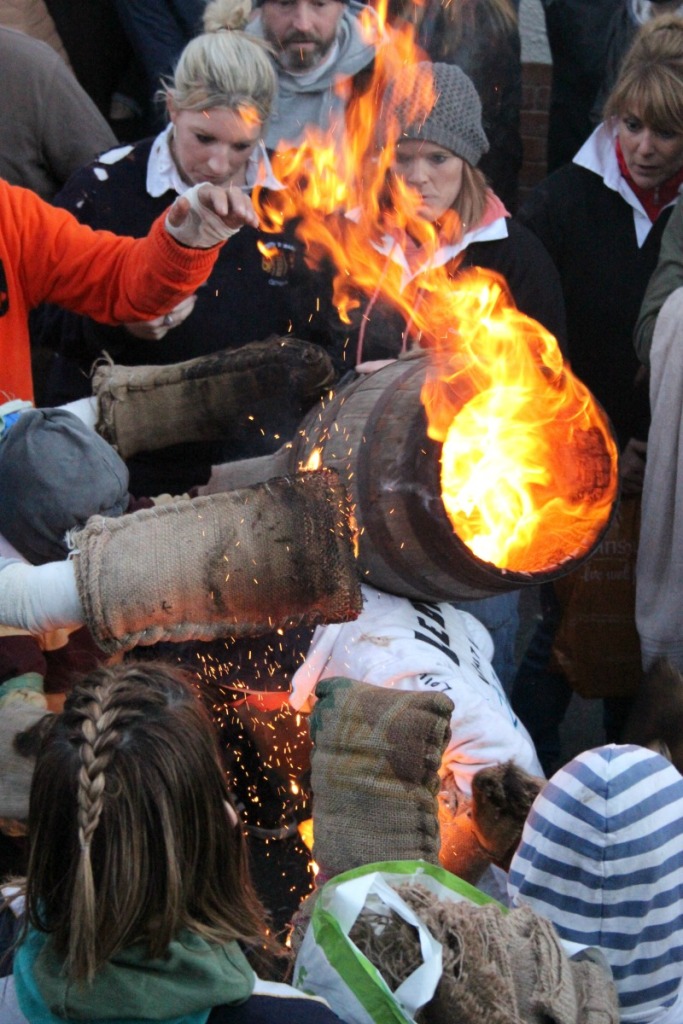 Children as young as seven get the honour of rolling the barrels. It’s local families that do it, generation after generation. It’s a wonderful tradition and it’s a privilege to be able to witness it. This year we got to see Eldest’s class mates do it for the first time and that added something extra too. They’re all layered up so they’re not in too much danger of getting burnt. 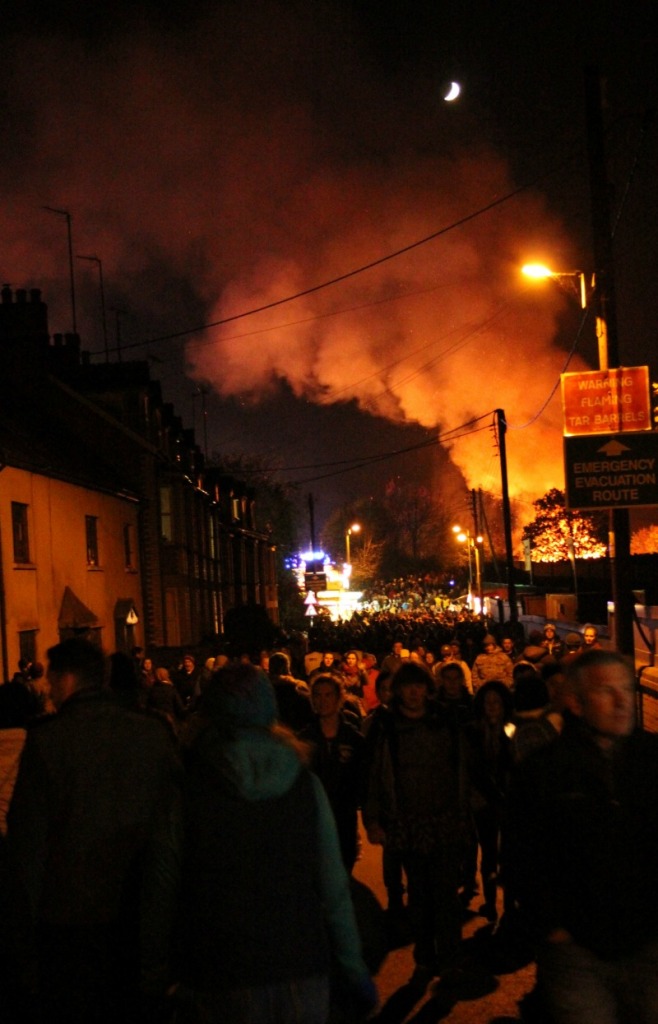 We managed to miss the lighting of the bonfire as we’d gone home for tea. It’s one of the best bits, if you ask me! This year, even if we’d given it plenty of time, we still would have missed it. Dolly steps had to be taken to get over the bridge. It was rammed. I’ve been a few times on a Saturday but this is the busiest I can remember. I’ve had a look online today but I can’t find the numbers of attendance. I’ve seen estimates of up to thirty thousand people but I don’t know if that’s accurate. I’ve also spotted figures nearer ten thousand. I dunno. It’s a lot, whatever the number. (It’ll be busy next year as I think it’ll be a Saturday then too- they don’t do Sundays). 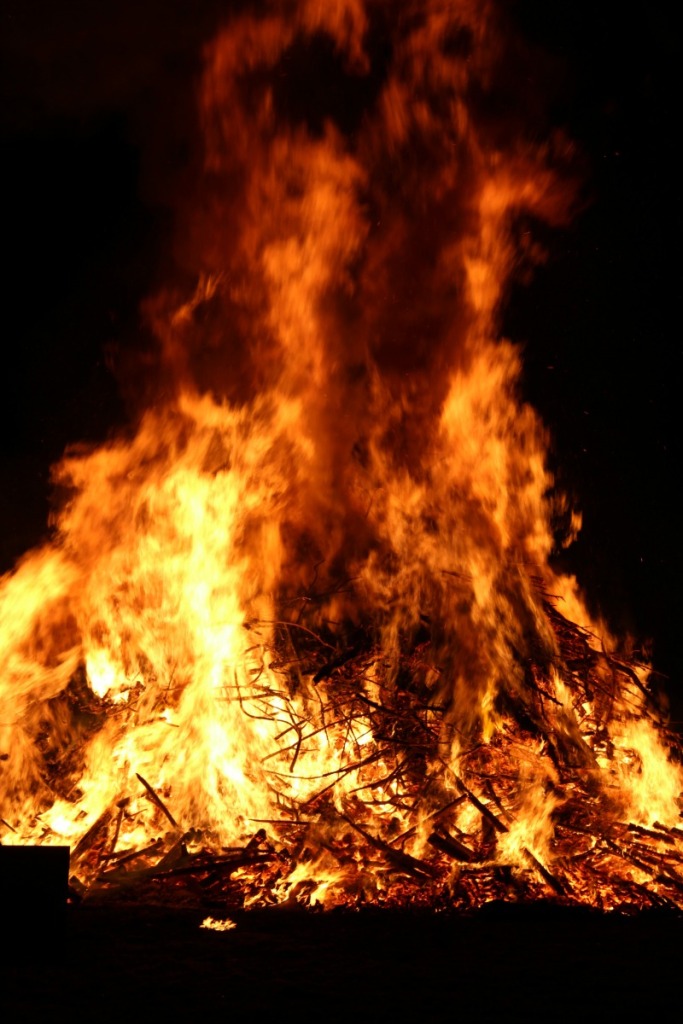 The bonfire is fierce. And massive. 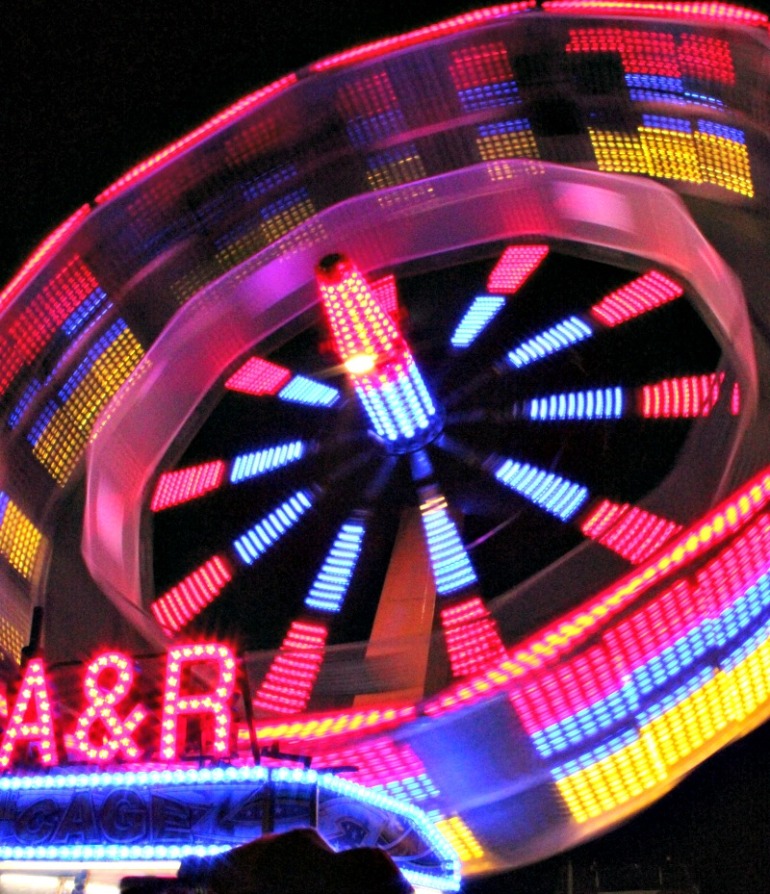 We went to the fair as well. A funfair is great but it’s easy to spend all your money, so we ended up being mainly spectators. I love looking at the bright lights and hearing all the screams!

After the fair, we got rid of the children and went out to watch the big barrels. There’s no art to this bit, getting a good Tar Barrel experience is mostly down to luck. If you’re not in the right place it is nearly impossible to fight your way to a good spot. And you can’t always tell what will be a good spot until you’re either in it, or stood miles away, feeling sad that you won’t feel the heat or the thrill of getting right up alongside a great big burning barrel. That is certainly the case on a busy night. I’ve found it more fun and been more brave when there is that little bit extra room to move. You can follow the barrels and get closer. 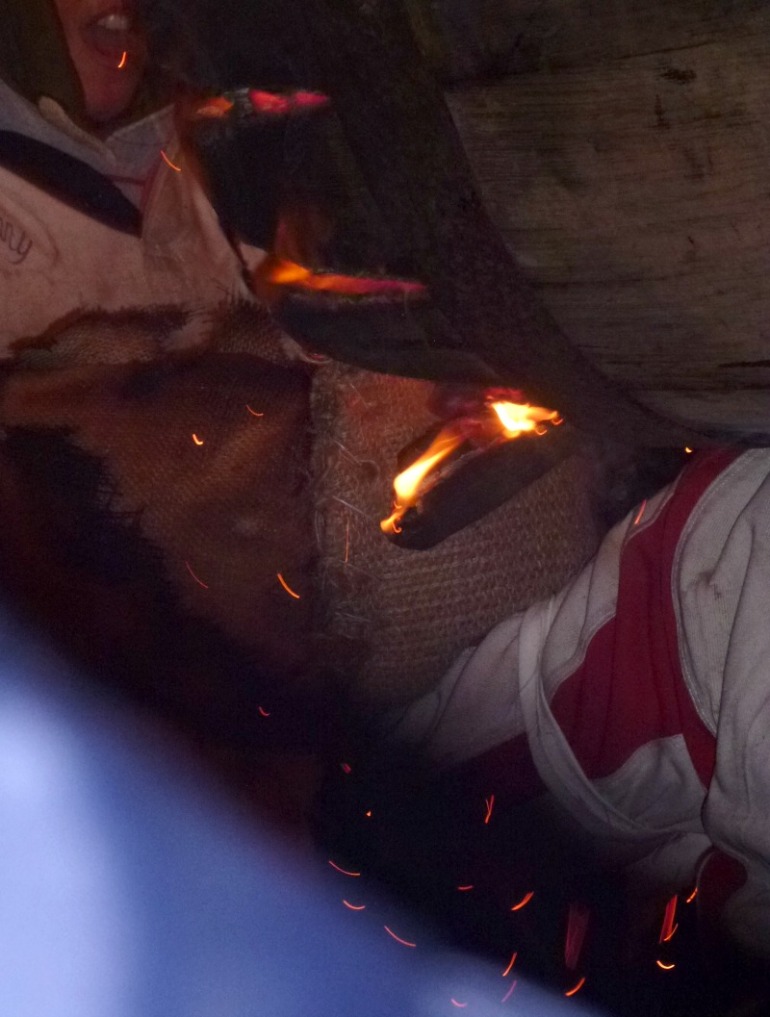 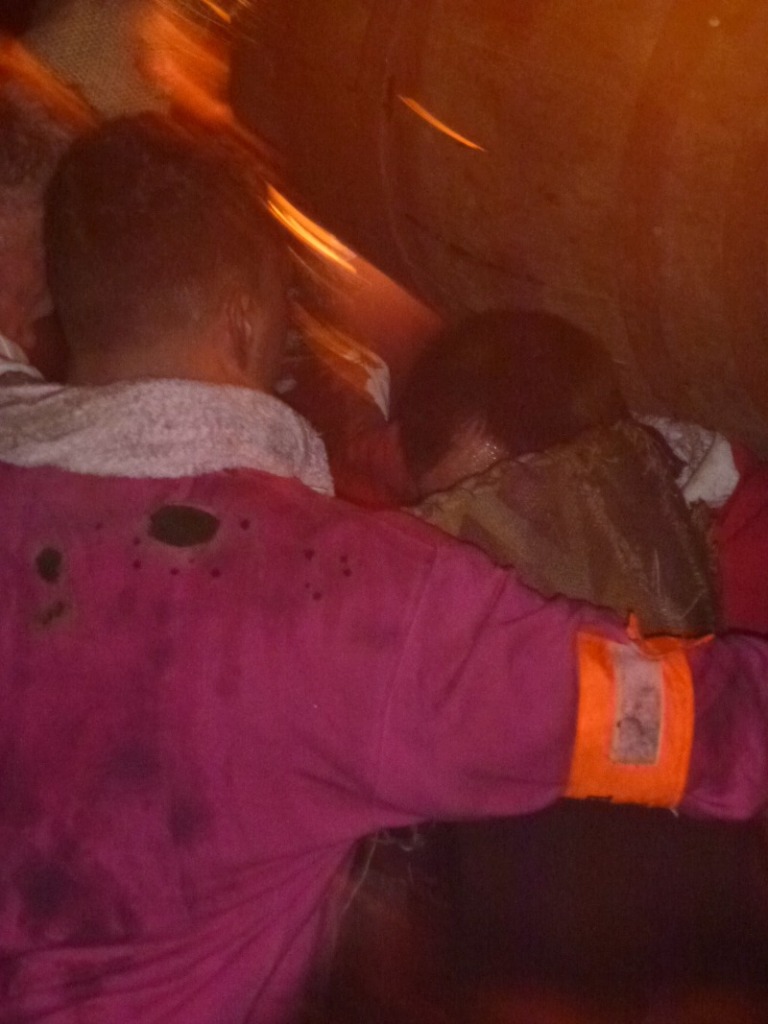 I swapped cameras for the late night stuff. Crikey, I’d forgotten how annoying my old point and shoot job was. The delay on the button drove me crazy and I missed loads of potentially amazing shots. I have many pictures of the back of strange heads, my sister’s boyfriend’s bum (deleted, thanks) and out of focus close ups of the hessian mitts (that protect roller’s hands). The zoom wasn’t instantaneous like I’m now used to either. I’ve become spoiled by a fancy pants camera. However, it was too dodgy to take it back out again. 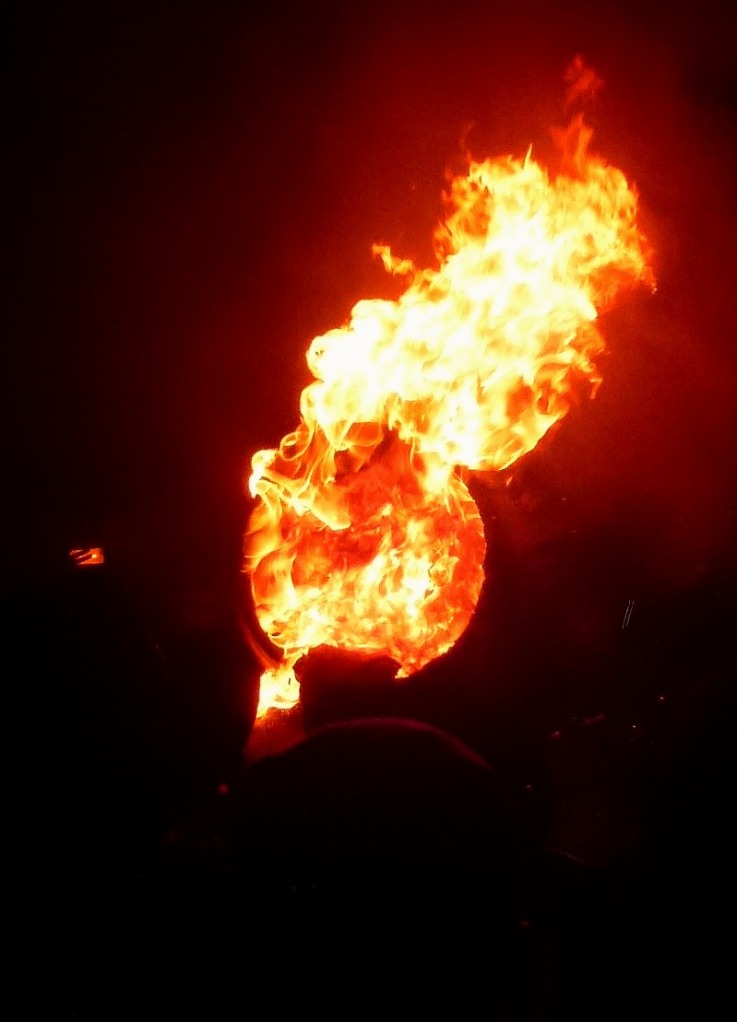 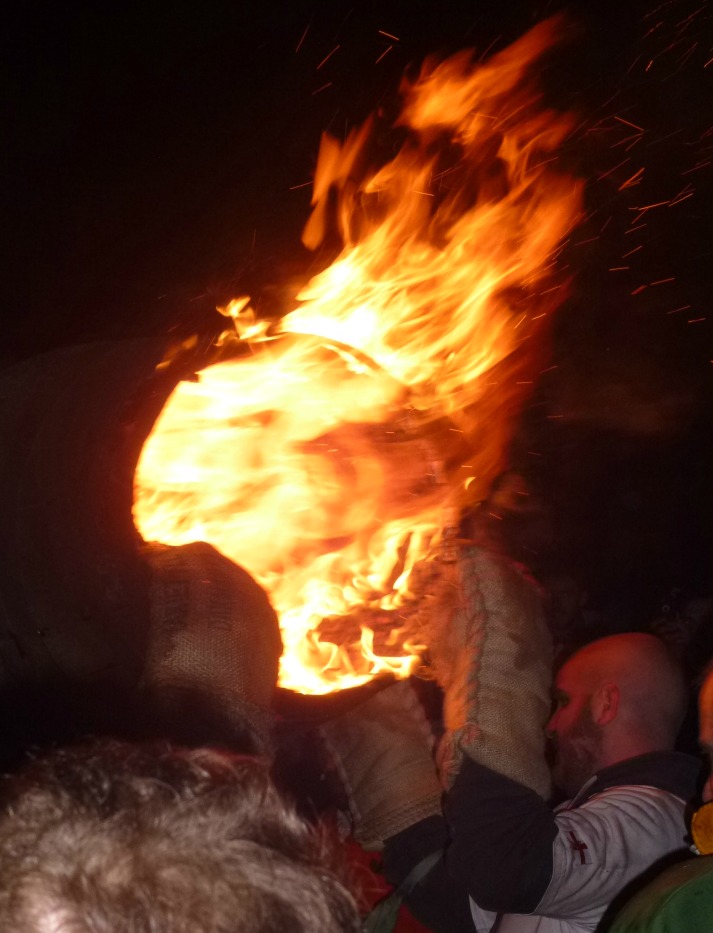 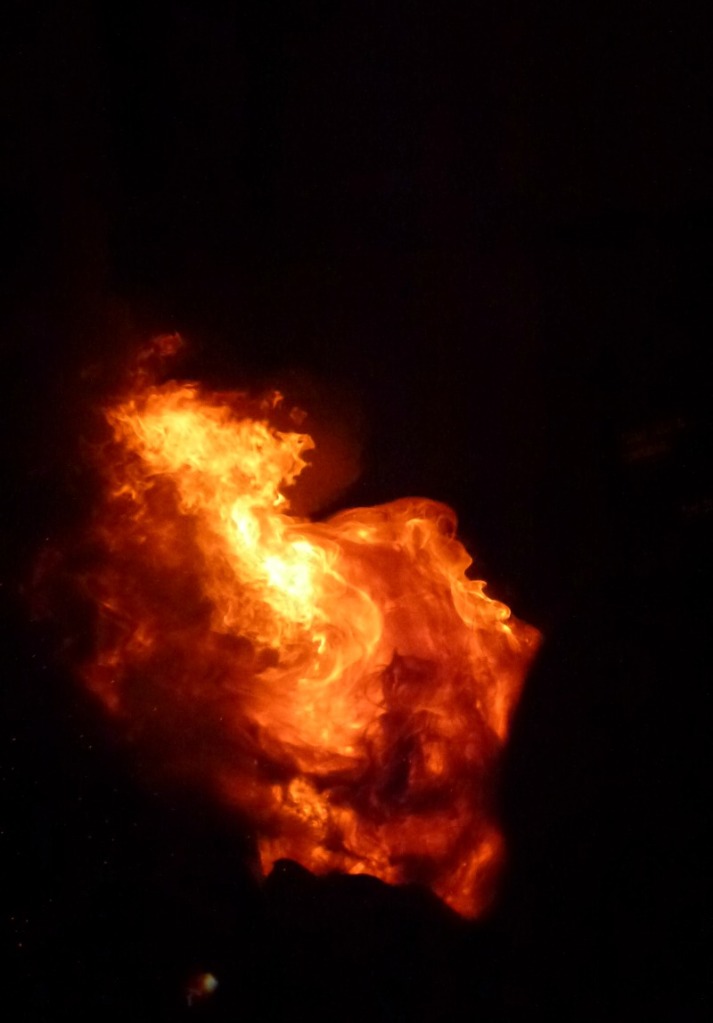 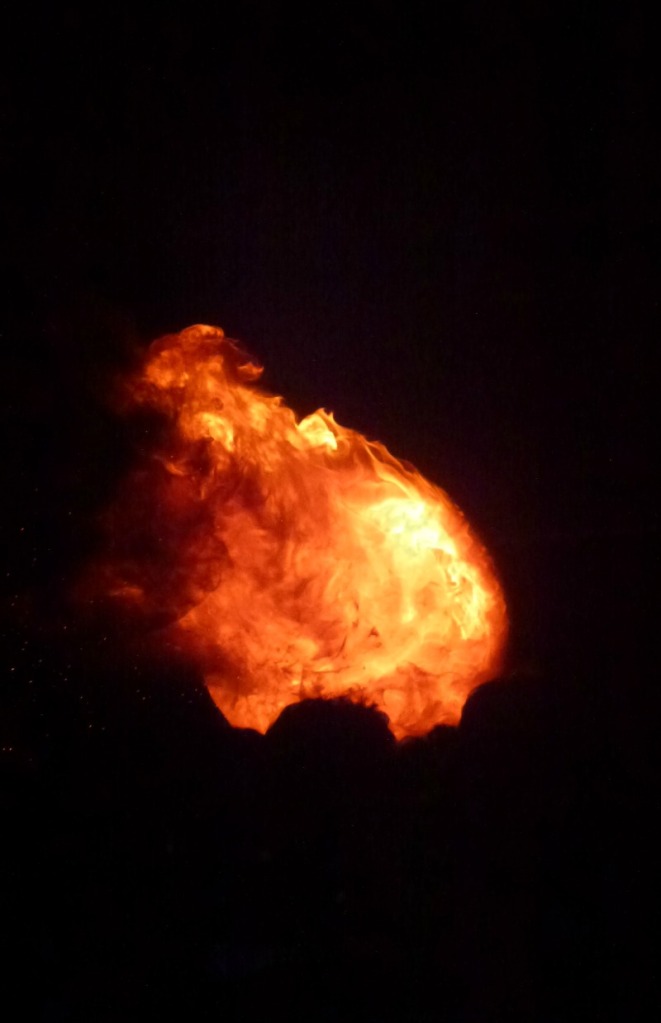 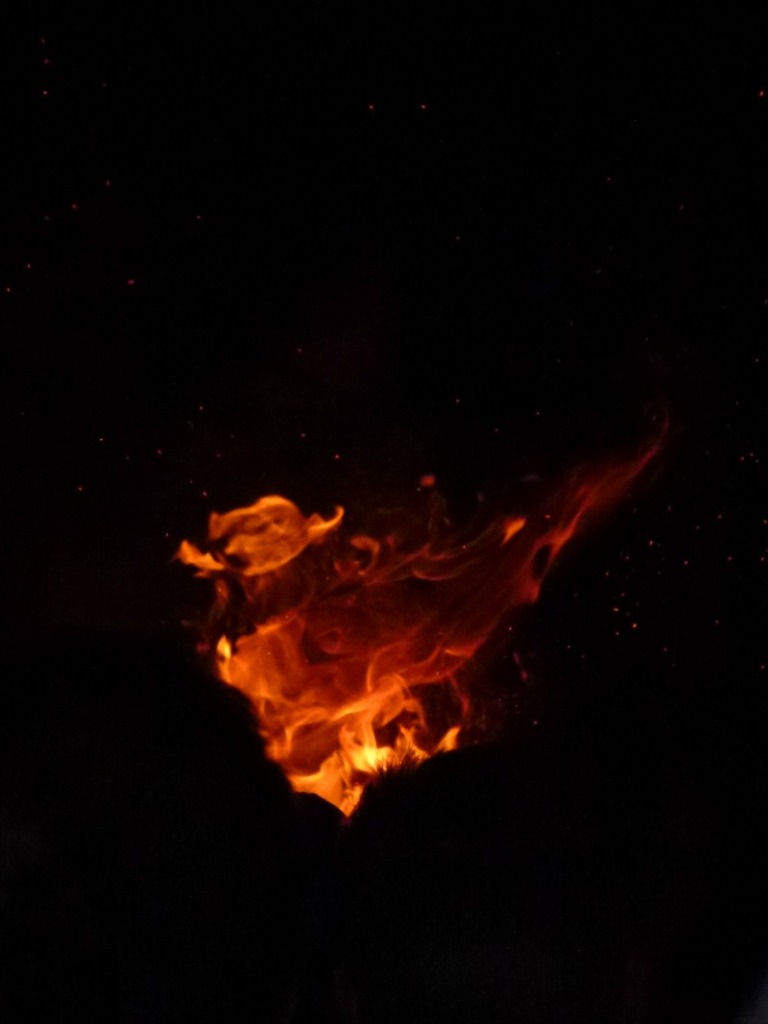 Even with the point and shoot, I do like those flames. I wish I’d been able to capture the sea of people around them. Next year. There’s always next year…. 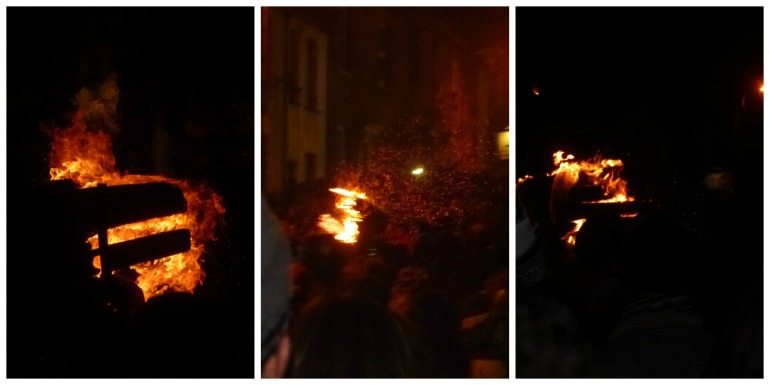 I’m a bit embarassed to admit that I only managed to stay out until half ten. My back was killing me and two days later it still hasn’t recovered. The plan is to train my muscles for the next 363 days so that I will not be a feeble old lady but have the stamina of a midnight barrel man. I was hearing stories in the playground this morning and I felt envious; people had seen late night punch ups and partying and I missed it! Pah! 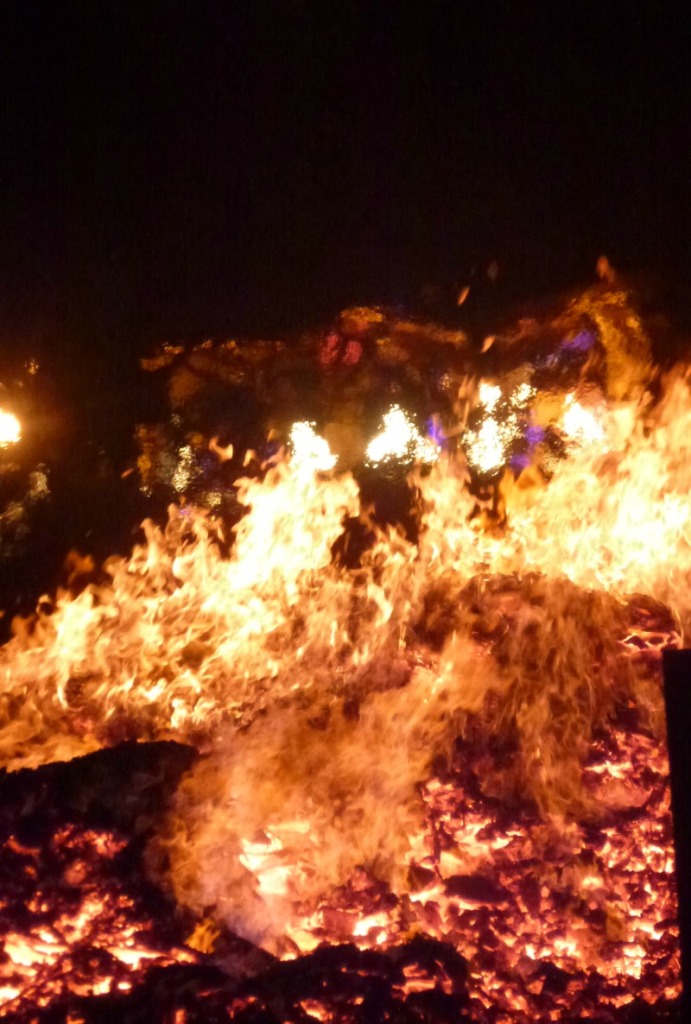 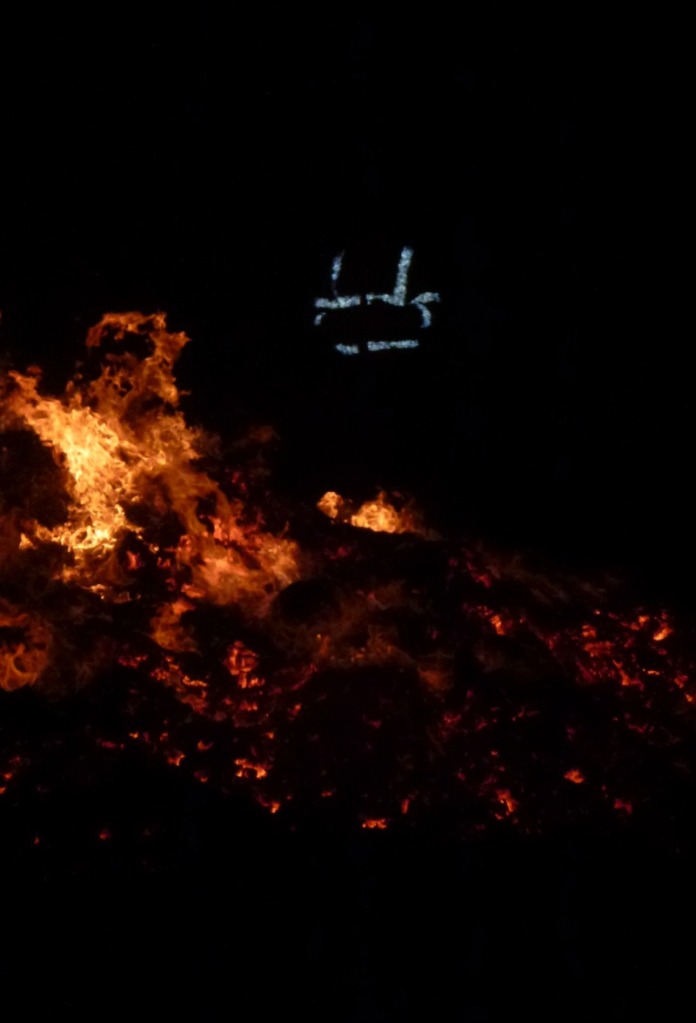 We went and checked on the bonfire one last time, which had reduced in size, and heat. Beyond it, the funfair was still full of gusto. 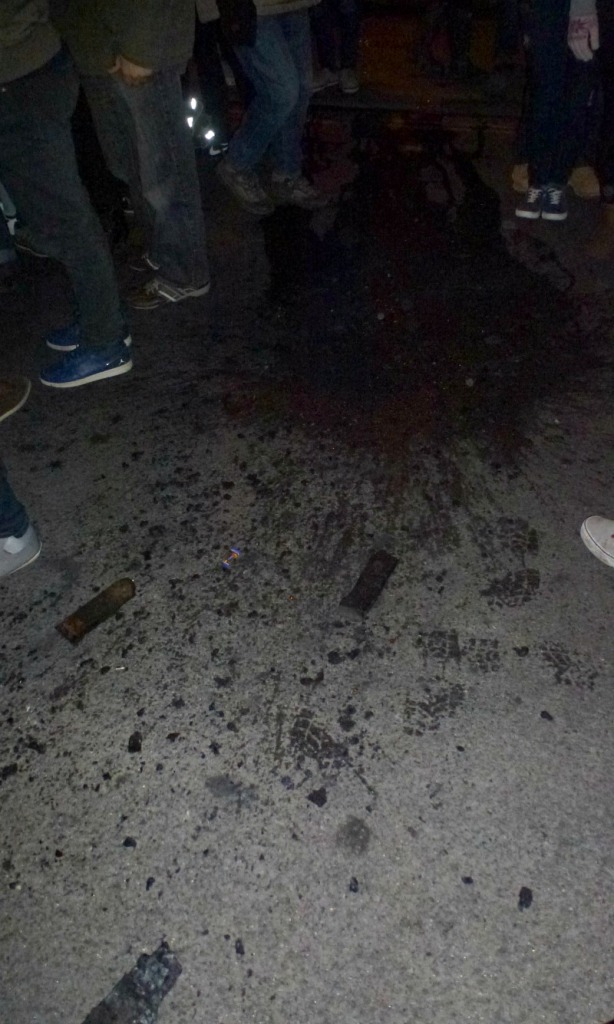 And then I said goodbye to it all for another year…

I’ve had a look on Youtube and there are new videos popping up all the time. I enjoyed this one. And this one shows the bonfire. And check out the #tarbarrels on Instagram too. There are some excellent pictures and films on there.

This is my latest WIP and so far I am loving it! It's obviously not the only work in progress but it's the most pleasing because it's just for me! There were lots of comments and DMs when I posted it the other day asking "pattern?" And other, more polite requests. Well, it's very loosely based on a turtle neck sweater from @knitsnknotswpg but I'm not following the pattern, I'm not using the same yarn, hook size or stitch counts. I've changed the ribbing too. I'm not sure at what point a pattern becomes a new design really. However, it was my starting point so I won't be releasing my own version of a turtle neck anytime soon. It's too close to the original to feel comfortable. But I do have a sweater/jumper patterns in the works and one of them uses the same stitch pattern (it's a common one and a coincidence here). It is totes different, so that one I can explore (later in the year when I have less on my plate!).
Eyeing up my computer before tackling the admin, pattern writing and spreadsheets. Crochet design is at least 50% sitting at my Grandad's old desk staring at the PC. It also includes watching myself jibber jabber whilst editing podcasts n such. That's a bit awkward sometimes but on at least two occasions I've laughed at my own jokes.
Chuck it all in and see what sticks. This isn't always my ethos but sometimes you have to play around to learn your craft. Over the last few years I often wonder if I've developed a reputation for being a bit haphazard and disorganized because of it. But don't assume I'm always a flake. I know what I'm doing.
I dyed yarn!! Then I made videos and put them on YouTube! 😬 If you've ever dyed yarn before and/or totally understand the principles behind it, please don't judge, I am really not a natural, it's embarrassing. Also, to give me a further sense of awkward cringe, I published a blog post to dig myself into a big talentless hole.
A pile of crochet clothes. All of them are arguably "me" but I have many different styles. So this is some but not all. I enjoy playing with style, which is why crochet is my cup of tea. It's the perfect vehicle for experimenting n stuff.
Here's a picture of me for #MarchMeetTheMaker. You're welcome.